Well I’m still here. I actually had the idea to start off with the line “I’m still standing!” but ever since a friend’s Dad once commented that he thought I looked like Elton John it’s soured my relationship with the Pinball Wizard. To be honest I’m not sure who should be more offended Elton or me?!

Anyway it’s almost a year since I was diagnosed with depression, which progressed into a major depressive episode. I suppose the diagnosis was just a way of dotting the i’s and crossing the t’s. It does however put a date on it for my own documenting purposes.

Being still here may not sound much but it makes me happy and please believe me there were times when I didn’t want to be here and never thought I’d be happy again.

A year, it’s a long bloody time but if someone was to ask me what I’ve done this year I wouldn’t be able to say. I know there’s been a lot of rumination and self-loathing. There’s been a fair amount of drinking, although if my doctor asks it’s in moderation. Plus miles of dog walking and more than enough crying for a lifetime.  I’d not worked until recently so on a day-to-day basis the time would drift away into nothingness, it wasn’t laziness more a stagnation.

A constant throughout the year has been the love and support from family and friends. I’ve not always accepted it but it has been very much appreciated.

So I’m back working, Vino’s Kitchen is on hold, it’s been more a case of getting back into a routine and ‘functioning’ (urghh, horrid fucking word) again in society. And No this isn’t part of some ‘Care in the Community’ scheme before any of you ask.

My work history has been chequered to say the least. Let’s just say work and me haven’t always seen eye to eye. The main problem being actually having to do it.

I’m not lazy, though certain ex bosses may argue to the contrary. It’s more a case of not seeing the point of working, especially not everyday anyway.

I always remember at the end of the school year some kids would receive a certificate for 100% attendance, I really couldn’t see the point. I mean going everyday? What for? Why the fuck would you?

I think the problem lies in the fact I always found school and exams easy, whether it was GCSEs, A-Levels or even my degree at University, it was all relatively straight forward. I wrote my final dissertation the night before it was due in and got a 2.1. Not that I’m proud of this, it’s just the way it was and in no way prepared me for the reality of work life.
So actually having to go to work on a daily basis coupled with hating pretty much every job I’ve ever had hasn’t really helped things. It’s not that I’ve grown to hate the jobs I’ve had, I’ve hated them before starting.

I’ve loathed my bosses and in the main the people that I’ve worked with.  Although if you’re reading this and you’re a current or previous colleague I don’t mean you, you’re alright. I’d like to say that it’s not arrogance or an air of superiority over my bosses but it really is. I struggled not to look at them and think they weren’t complete fucktards, most were.

I guess it all harks back to not knowing what I want to do, I still don’t but I know what I won’t do again.

If you’re interested in knowing what I am actually doing read on.

I work in a school kitchen a couple of hours a day over dinnertime. I’m a kitchen porter so there’s minimal cooking, lots of washing up and I get to serve the kids. It’s the school where N and M go, this in itself has had a varied response from them. M is pleased to see me everyday and N refuses to acknowledge my existence. Thus M gets a large pudding and N gets extra vegetables. Not that I’m childish you understand.

I enjoy working at the school, it feels like I’m doing something quite worthwhile.  The current school cook has been there for 20 years and is looking to retire so I’ve made it clear that I’d like to take over. Plus the cook feeds me a school dinner and does my washing for me. If she wasn’t in her sixties I’d contemplate a little dalliance, she looks after me better than the current Mrs.L (joke!!).

Of course there are a couple of issues, the main being the uniform. I have to wear chef whites, I want to wear a tabard. I reckon I could totally rock a tabard. And contrary to what my friends say, I don’t need to wear a beard net, I think it’s character building for a 5 year old to find a grey curly beard hair in their custard.

Although there is a girl who without fail bursts into tears every time she sees me armed with a jug of gravy. I haven’t worked out if it’s me or the gravy that scares her the most?

I’m also working in a real ale bar in the evenings, I’m the oldest barman in town. This point was proved to me when I was chatting to a colleague.

Now I like to think I’m down with the kids as they say, I know a bit about popular culture, YOLO and all that shite. However after instigating a conversation about music I was left feeling like a proper old fart, I didn’t know a single band she named. Obviously I’m putting it down to her poor taste rather than my advanced years.

To some these jobs may not seem a lot and I’ve been guilty of doing the me thing, thinking I should be doing more but you know what it’s a starting point and I’m ok with that.

The thing is I’m probably the happiest I’ve been for a long time and that’s ok, I’m not worried about being happy I don’t think there’s some payoff to come because things are good at the moment.

So thanks to all those who’ve supported me over this year, whether it’s a text, a call, an email, just reading this old rubbish. It means a lot.

I’m going to finish by doing something I’ve not done in a while and that’s a recipe, it’s where the writing first started and feels appropriate to do it again. 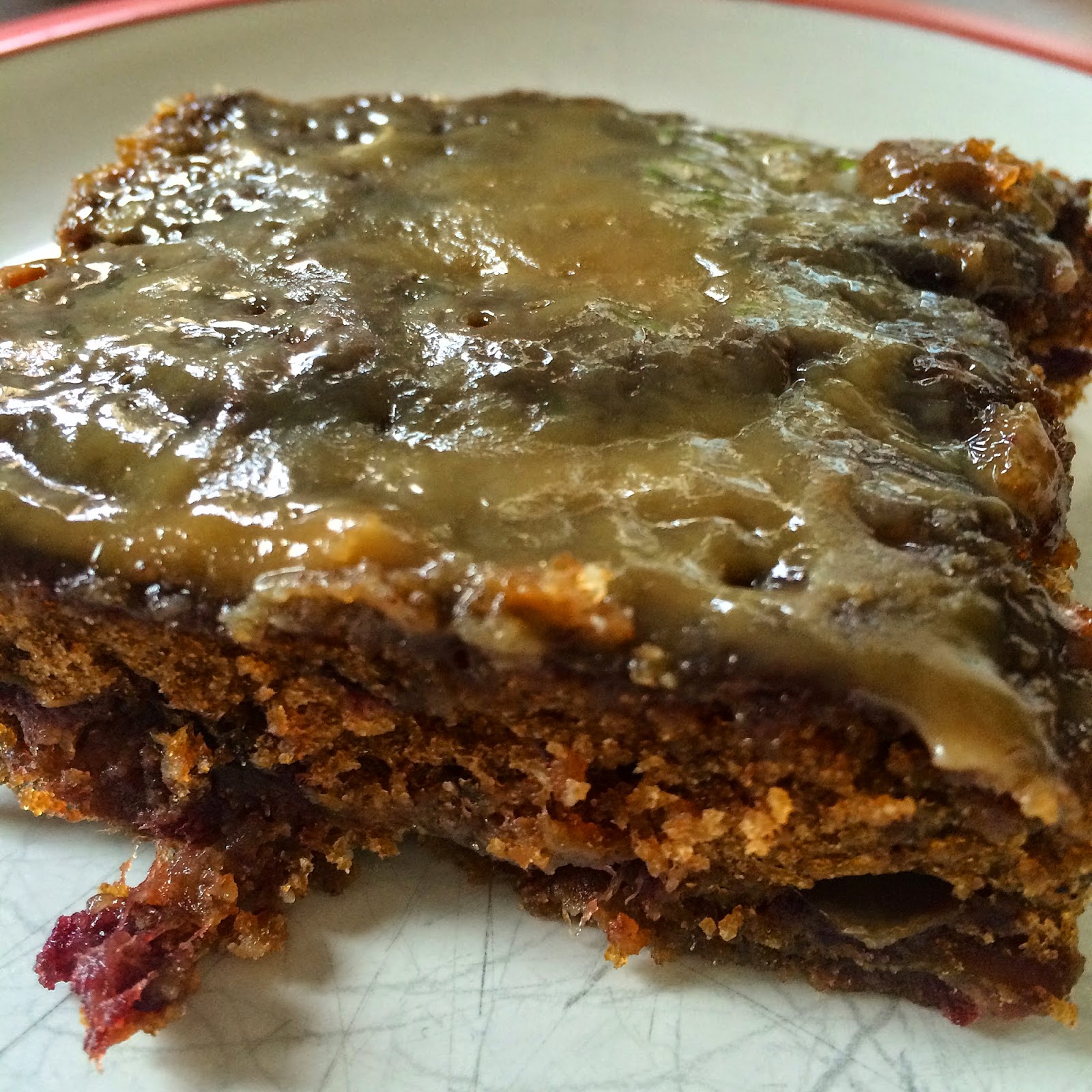 Until this weekend I’d never made this classic pudding before, I’d eaten plenty but never had a go myself and I have to say it’s really easy. The recipe comes from The Guardian, it’s one of their ‘perfect’ recipes where they test variations and amalgamate to find the best version. Their recipe contains walnuts, mine doesn’t, and I don’t see the point.

2. Make the sauce by putting all the ingredients into a pan with a pinch of salt and heating slowly until the butter has melted, then turn up the heat and bring to the boil. Boil for about 4 minutes, until the sauce has thickened enough to coat the back of a spoon. (I stirred it constantly, not wanting to ruin another pan by burning it.)

3. Pour half the sauce into the base of the dish and then put it in the freezer while you make the rest of the pudding.

4. Put the dates and bicarbonate of soda in a heatproof dish and cover with the boiling water. Leave to soften while you make the rest of the pudding.

5. Beat together the butter and sugar until fluffy, and then beat in the eggs, a little at a time. Stir in the flour, baking powder, cloves and a pinch of salt until well combined, and then add the dates and their soaking water and mix well.

6. Take the dish out of the freezer and pour the batter on top of the toffee sauce. Put into the oven for 30 minutes, until firm on top.
6. Heat the grill to medium, and poke a few small holes evenly over the surface with a skewer or fork, and then pour over the rest of the sauce. Put briefly under the grill, this almost gives a crunch to the top. It’s personal preference to do this or not, I wouldn’t. Take your eye off it for a minute to see what the screaming from the other room is about and you’ve fucked up a perfectly good pudding by burning it to a crisp. Best thing to do is pour the sauce over and stick it back in the oven.

Serve with cream, ice-cream, custard or whatever floats your boat, I’d stay away from yoghurt or crème fraiche, I mean if you’re making a sticky toffee pudding you’ve already surrendered to the calorific content, in for a penny and all that.